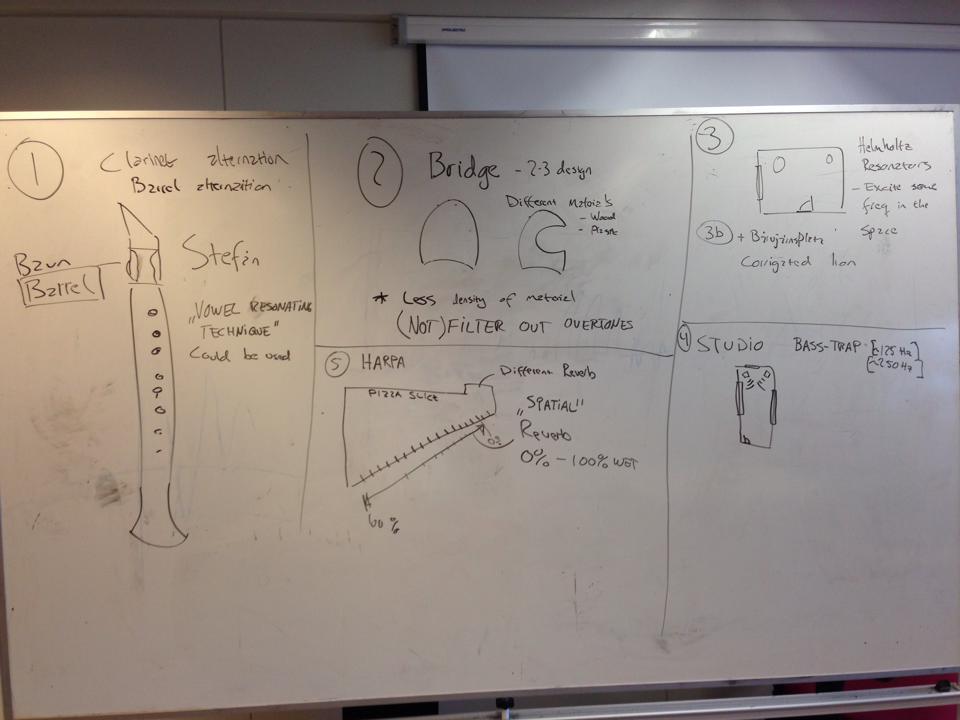 Text on architecture and sound

Influence of buildings on musical tone - article by Hope Bagenal

An Acoustic Questionnaire for Organists - article by Hope Bagenal

On clarinets - From the book Musical Instruments - History,Technology, and performance of instruments of Western Music by Donald Murray Campbell, Clive Alan Greated and Arnold Myers.

On violins - From the book Musical Instruments - History,Technology, and performance of instruments of Western Music by Donald Murray Campbell, Clive Alan Greated and Arnold Myers.

Lecture by Þráinn Hjálmarsson - introduction to the course and the possibility within the framework of the collaboration with the Engineering students at University of Iceland.

WEBSITE: Overview of the development of Thranophones - Electro-acoustic instrument

Lecture by Halldór Úlfarsson - Lecturing on his own interest in music instrument design.

INTERVIEW [In Icelandic]: On a new Cello - developed by Hans Jóhannsson and Hildur Guðnadóttir Ingveldadóttir

The Alvin Lucier's piece, I am sitting in a room was the main focus of the work, making some audio feedback through the spaces at the Academy of the Arts.

MAX 5 PATCH: I am sitting in a room in 7 steps - Patch where it's possible to record each re-recording separately 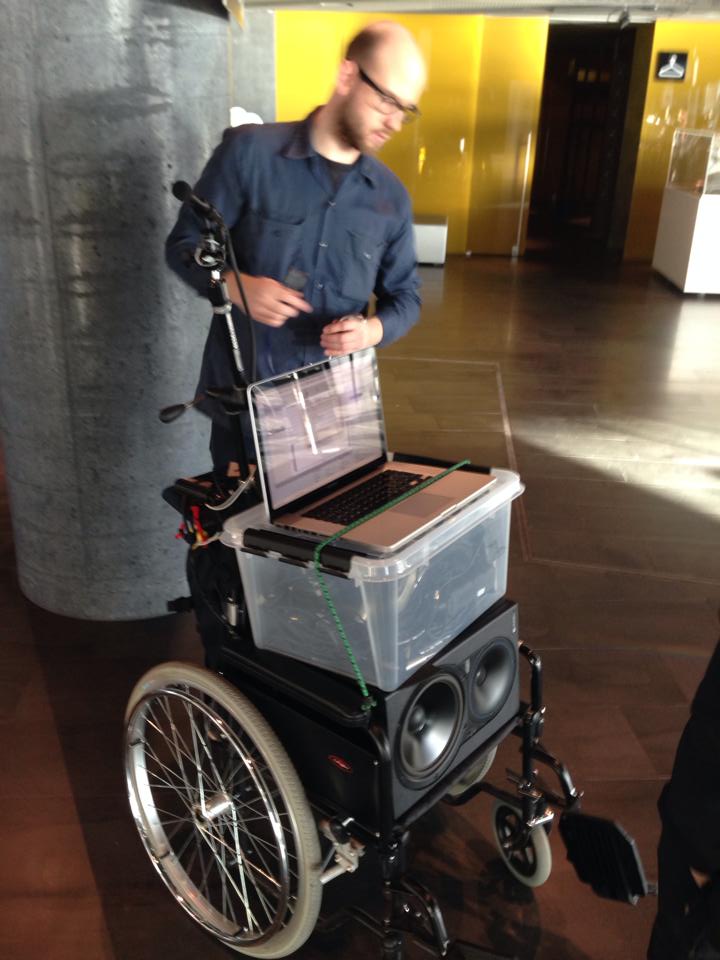 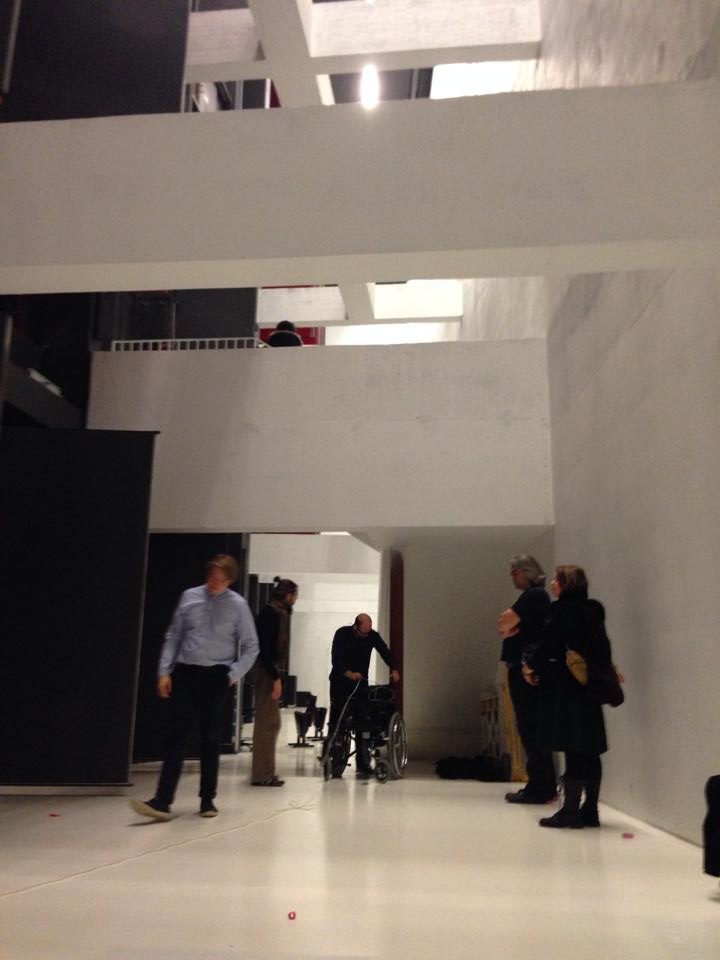 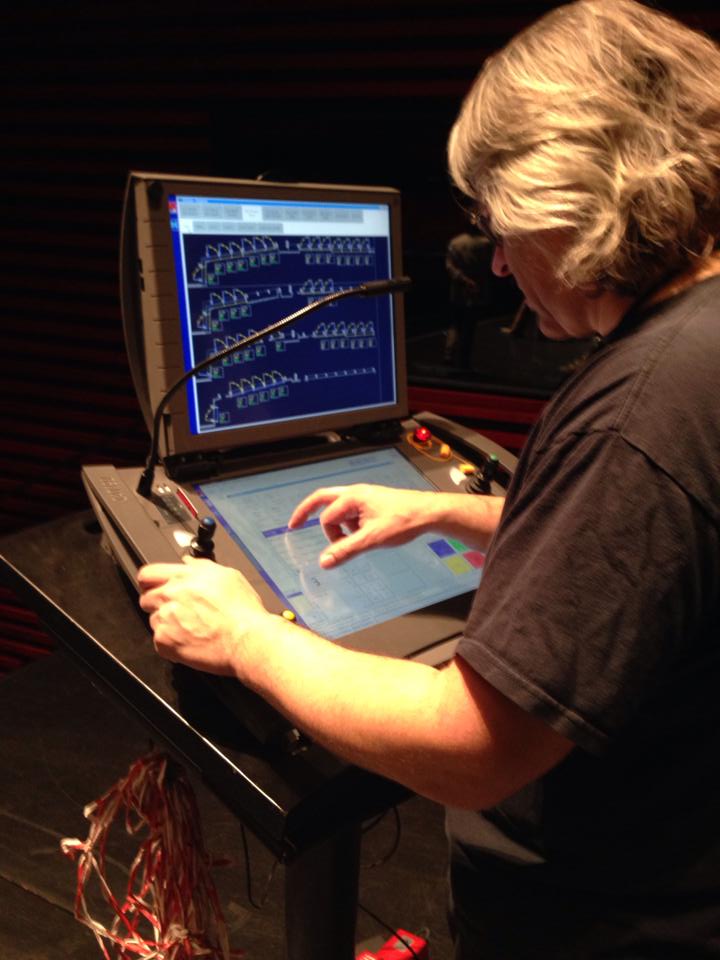 Einar Rúnarsson - our guide to the house, working on CAT 192, controlling the sound in the concert hall 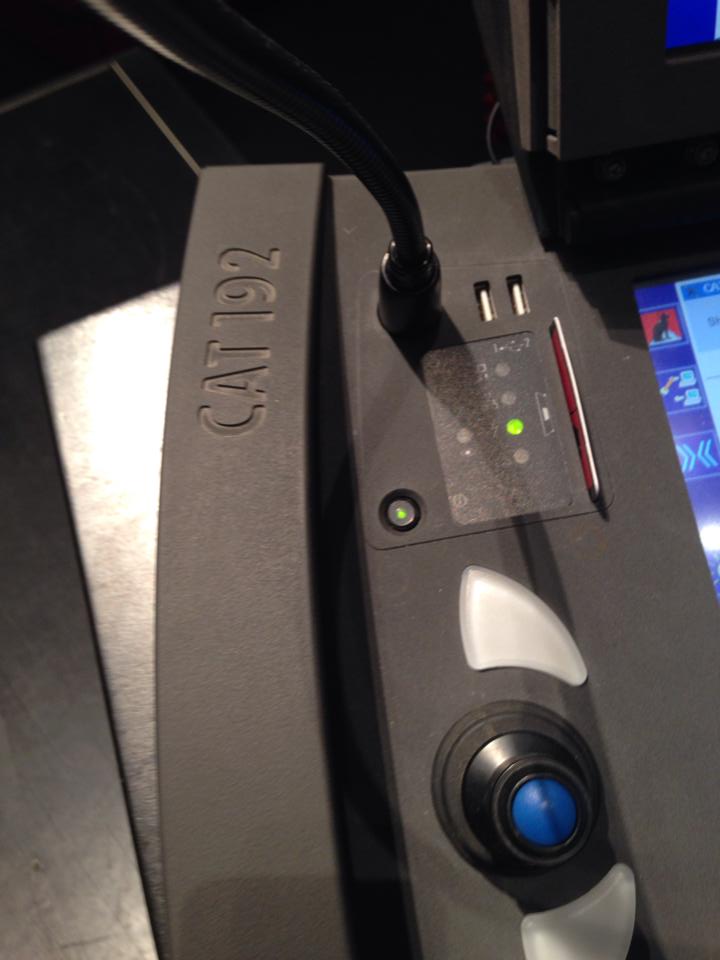 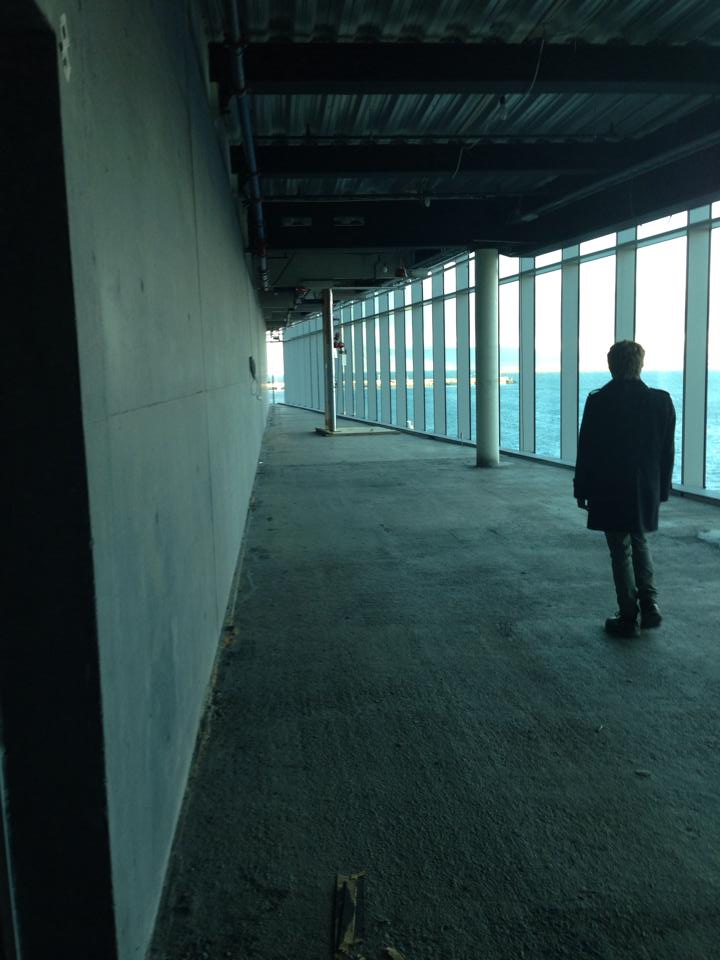 "The Pizza Slice" - photo taken in the wetter reverb spot 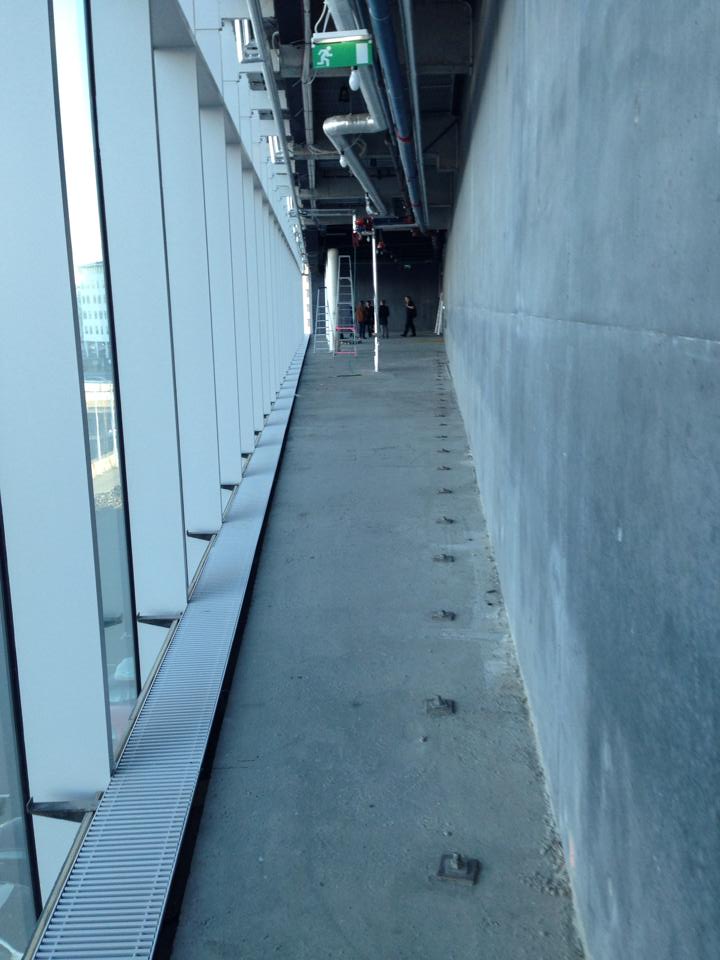 "The Pizza Slice" - photo taken in the dryer reverb spot

THE PIZZA SLICE - Was interesting as an acoustic space, where the reverb of the sound got dryer when listening in the end where the windows are closer to the walls, the result is some sort of "linearity" in the space. An ear-opener to acoustics and is possible to work further on.

ELDBORG - The concert hall had a surprisingly flat response in frequency measurements and controlled opening (with the computer CAT 192) into the Reverb chamber resulted in no drastic change in the frequency response measurements.

Meeting with Dr. Fjóla Jónsdóttir and Dr. Rúnar Unnþórsson, professors at the University of Iceland, getting further information on what could be done with the engineering students in the given time frame.

Last preparation before opening the conversation with the Engineering students - 2 projects were focused on, the "Cello Bridge" designing and "Practice room in C Major". Other project that will be done without the income of engineering students is the work on a Clarinet barrel.

1) Task is to model a flat chair with no cuts from [just a solid body] and compare the computer results to a made object, that Hans Jóhannsson, violinmaker, will make the physical object

DOCUMENTS for Engineering students: Computer Models for Ansys - Drawing of a Cello chair for computer modeling.

Final Report on the project [in Icelandic]

"Brúarsmíði" - Powerpoint presentation of the report in Icelandic 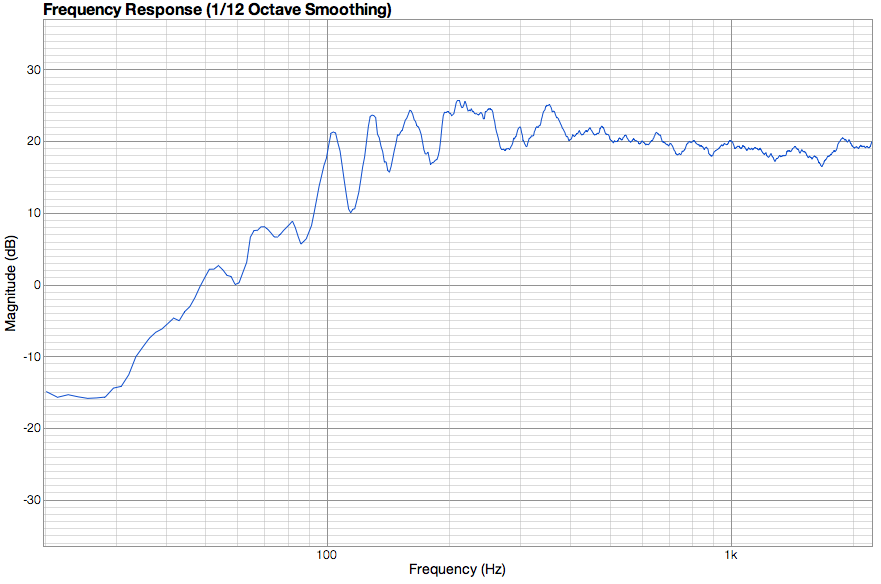 DOCUMENTS for Engineering students: Computer Models for Ansys - Drawing of the space at the Academy of the Arts for computer modeling

A more hands-on project, where the conversation between engineering students is not the main focus, but the project needed a try out and possible within the resources of the course.

Designing a new Clarinet Barrel, trying out for example

1) How a plastic 3D printed Barrel would effect the timbre of the instrument - variables: the density of a plastic printed object is not the same as having a solid plastic material, using plastic material instead of wood

3) How the shape and a longer barrel (then alternating the fundamental putch of the Clarinet, therefore alterning the key grips) effects the instrument 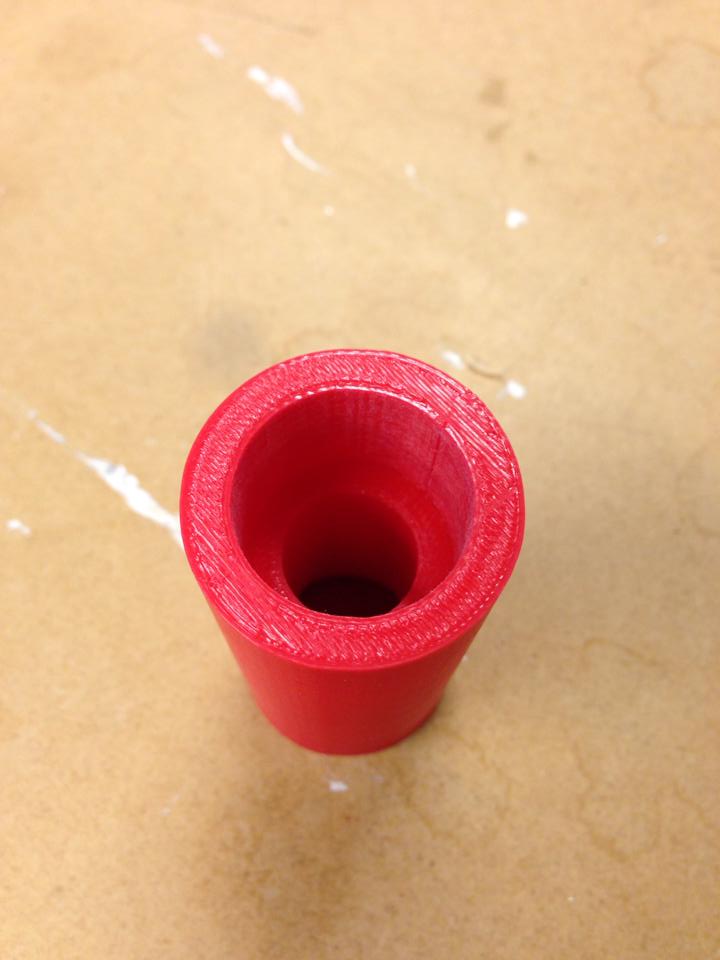 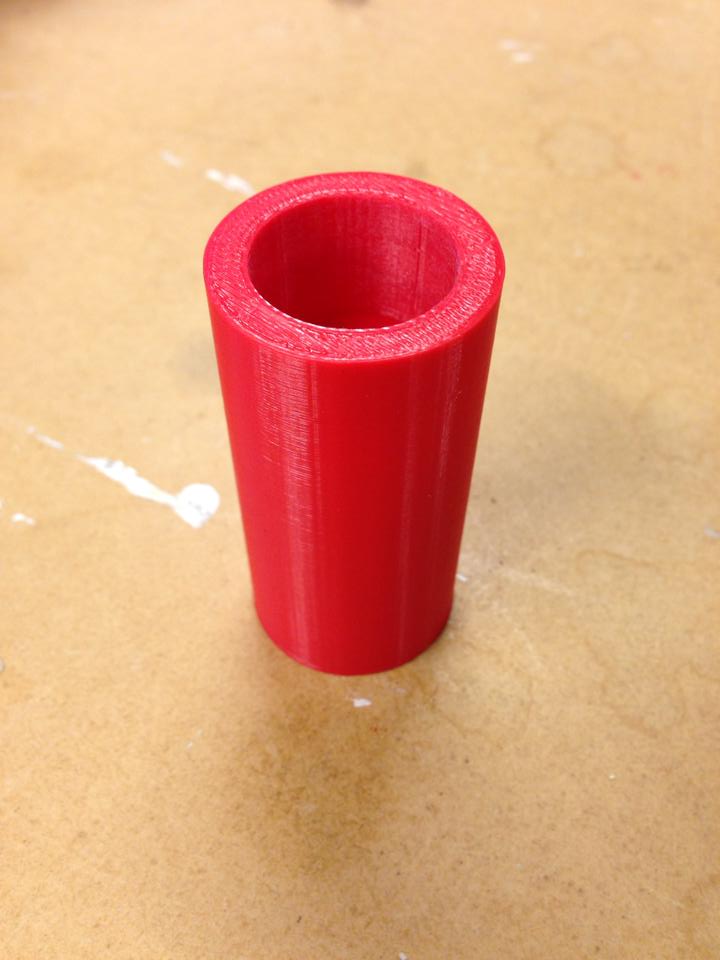 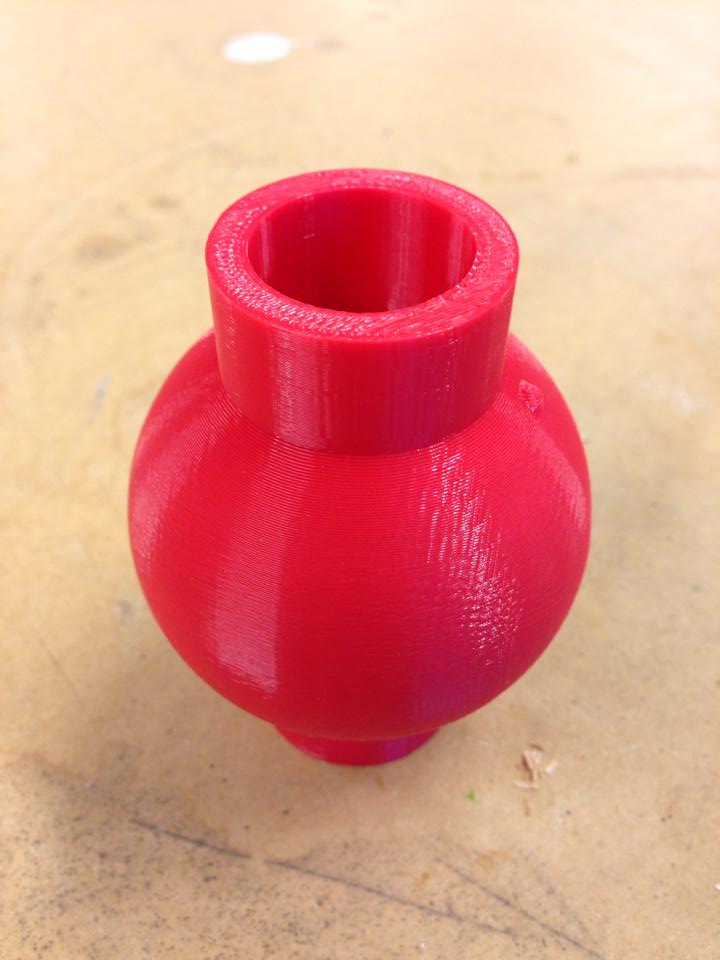 "Spherical barrel" - The length is longer than a standard Barrel, it has a spherical volume inside 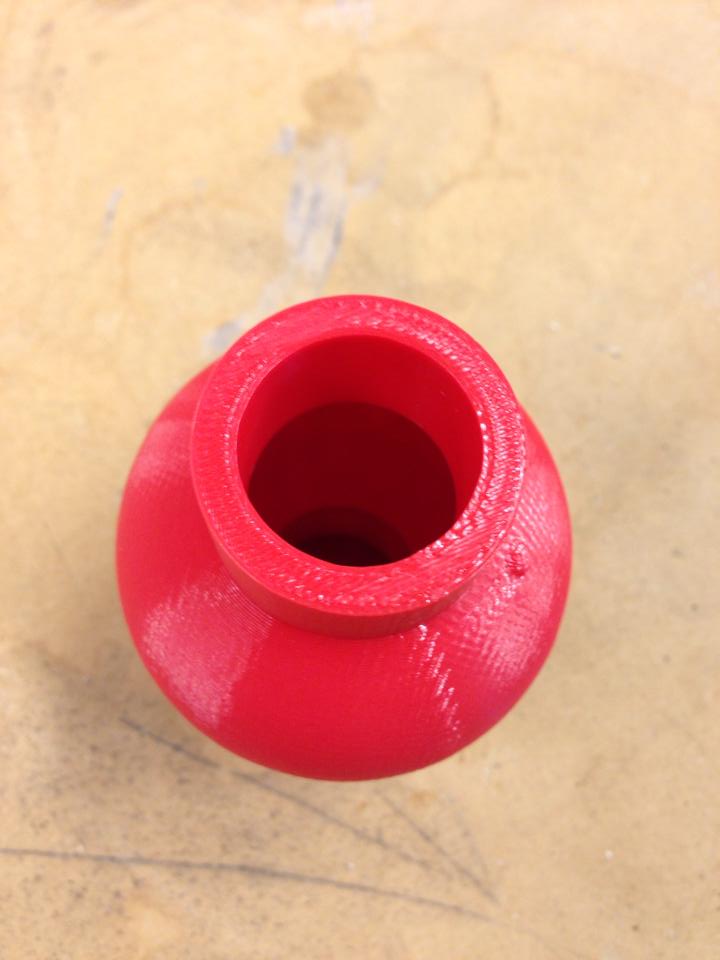 "Spherical barrel" - The length is longer than a standard Barrel, it has a spherical volume inside

STANDARD BARREL - As predicted the standard barrell which no change of the inner design resulted in a standard sounding Clarinet. Minor flaws were involved in the size of the holes that connects to the mouthpiece and the clarinet.

SPHERICAL BARREL - The Spherical Barrel has a high Q on one frequency and overruns the resonance in the clarinet itself, therefore the clarinet only can do this one tone with a slight color changes of that tone by using the keys of the instrument. Special interest is that if a tone is made with the clarinet mouthpiece alone and then moved in front of the spherical barrel, the tone alters up a whole tone.

The plan is to use the VOWEL application by Paul Falstad to reshape the Clarinet Barrel, the inside parts of the barrel that affect the sound are 30 mm long and widest diameter possible is 14 mm. Additional to these 30 mm there are 18 mm on each site in use to connect the mouth piece and the clarinet. The total length of the barrel is hens 66 mm.

The Third and Fourth 3D printed tryouts will be taken from the same shape, but where it's not symmetrical shape the fourth print will be the "opposite" of the third one. See drawings below. 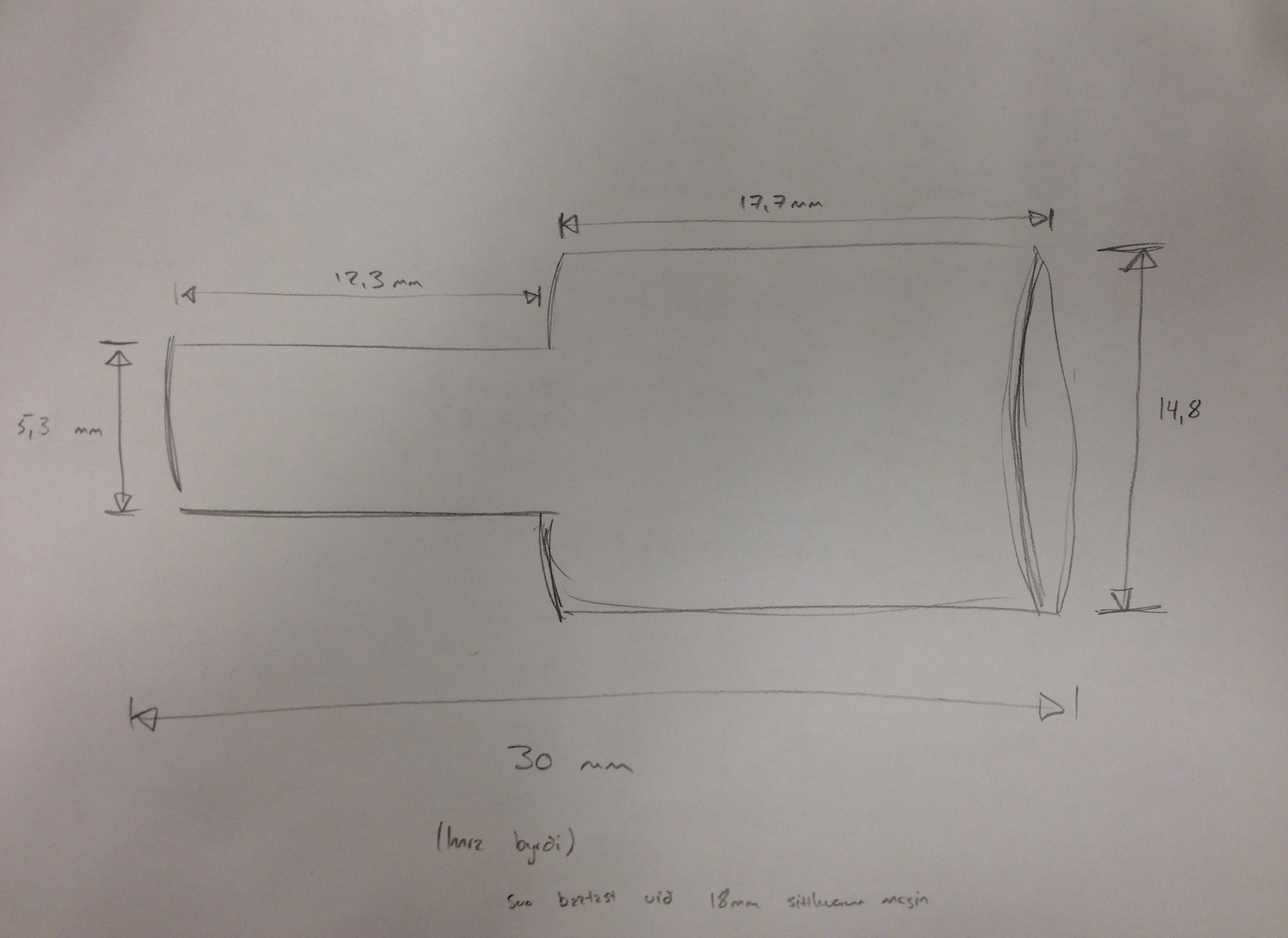 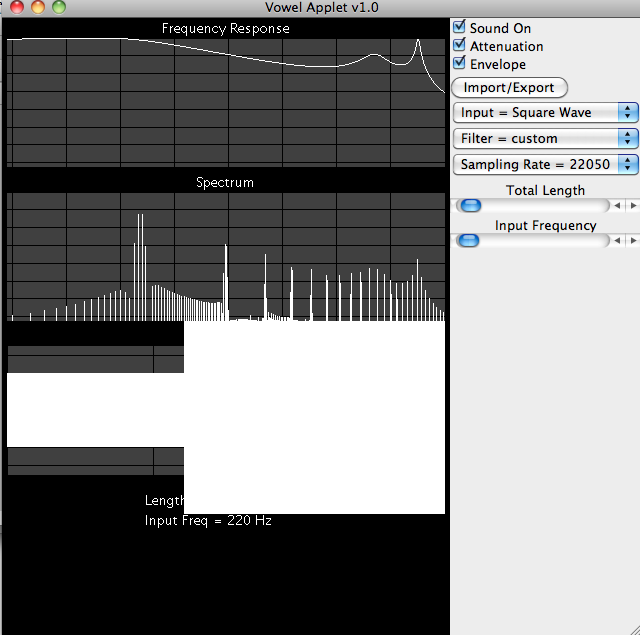 The VOWEL application's prediction to the frequency responce of the barrel 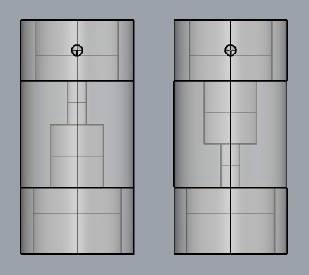 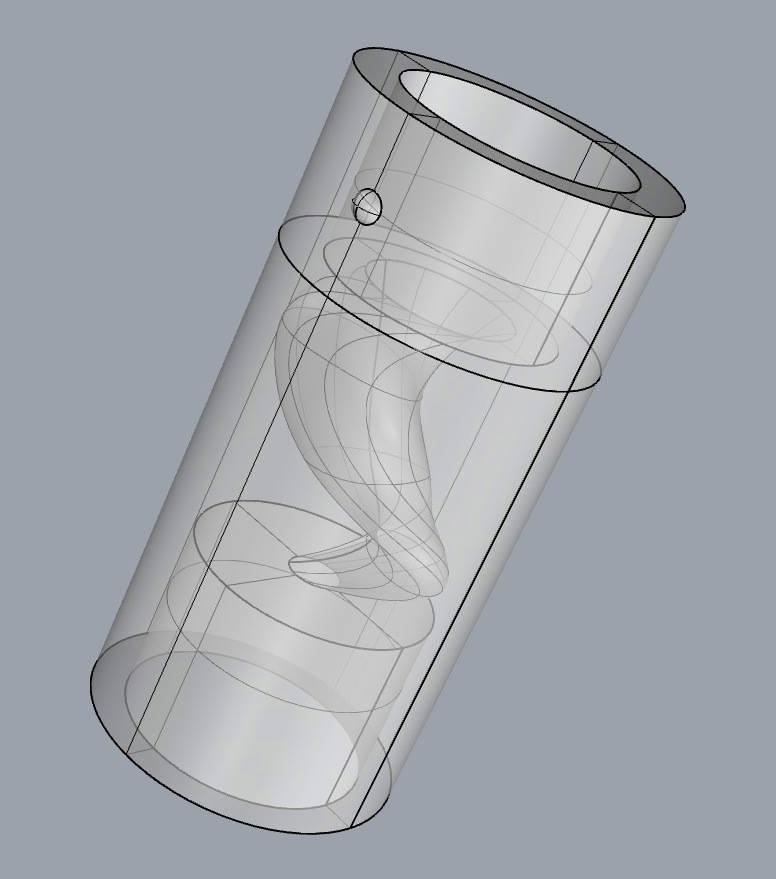 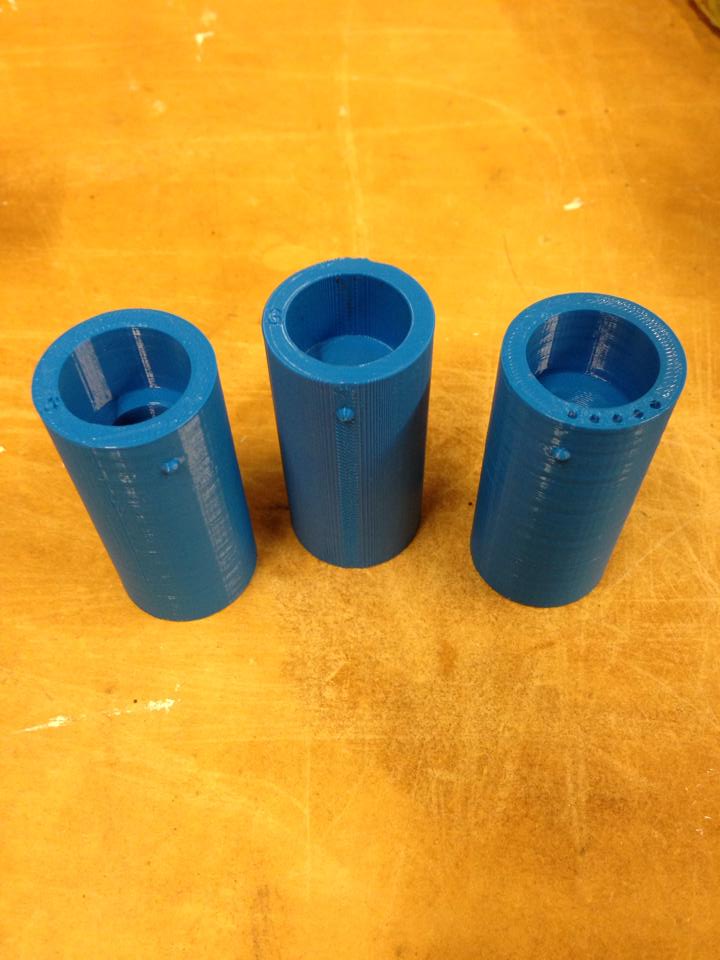 The New Year's concert of S.L.Á.T.U.R, was held in Mengi, Óðinsgata 2, 101 Reykjavík, 10th of January 2014 and was dedicated to prepared clarinets. Composer Guðmundur Steinn Gunnarsson wrote a piece in 3 movements with 4 prepared clarinets, using the latest version of the barrel. An excerpt from the work is audible below.

Development of a cello bridge for tryouts, with Hans Jóhannsson violin maker, we defined 4 shapes of cello brigdes, based on predictions on how the modes of the bridges would behave (see further: modal analysis). 4 different chairs were made in the first lesson. Tryouts will be done in 3rd lesson.

Four differently shaped cello brigdes as that was a result group discussion. 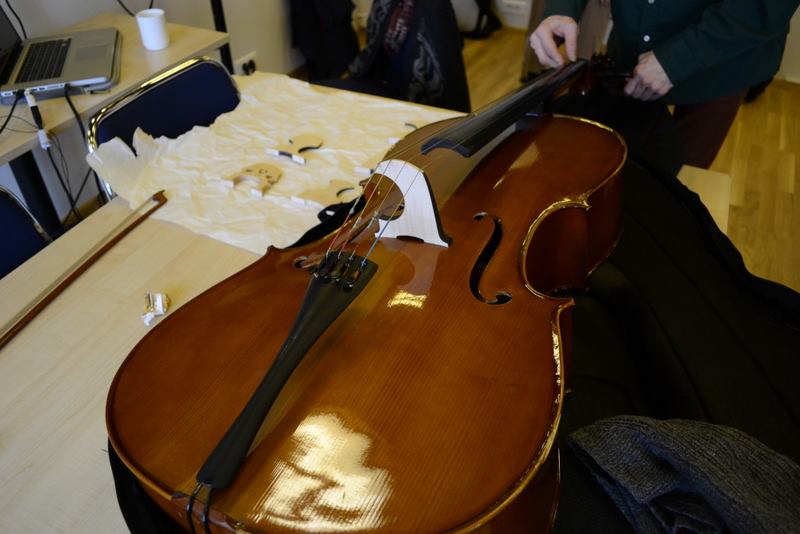 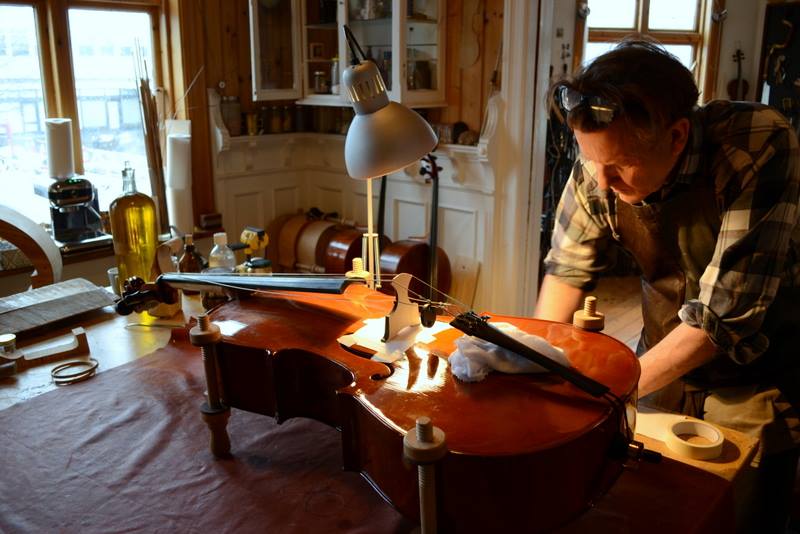 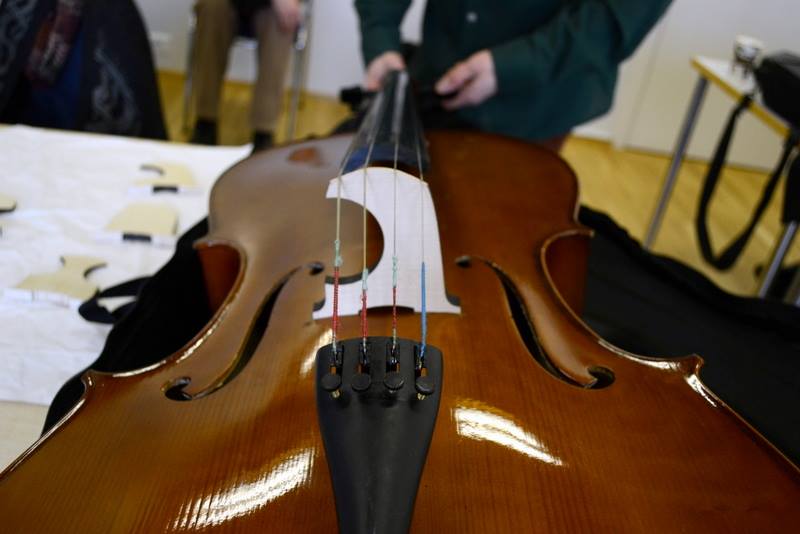 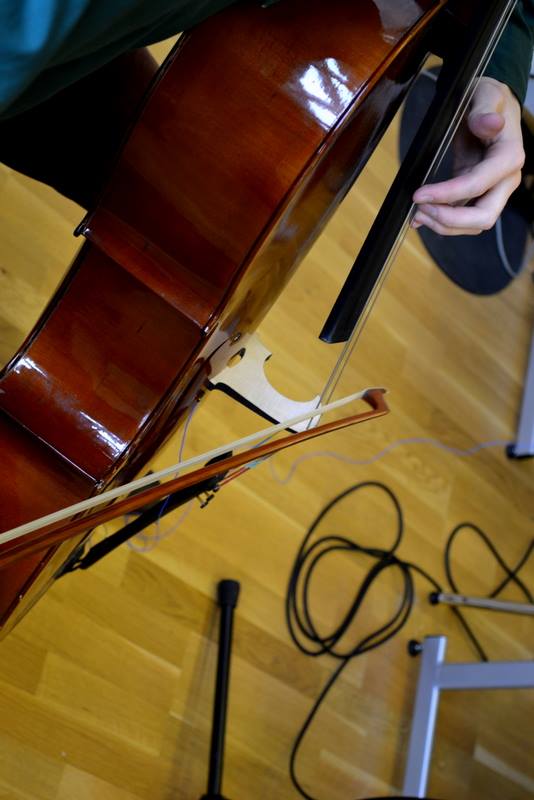 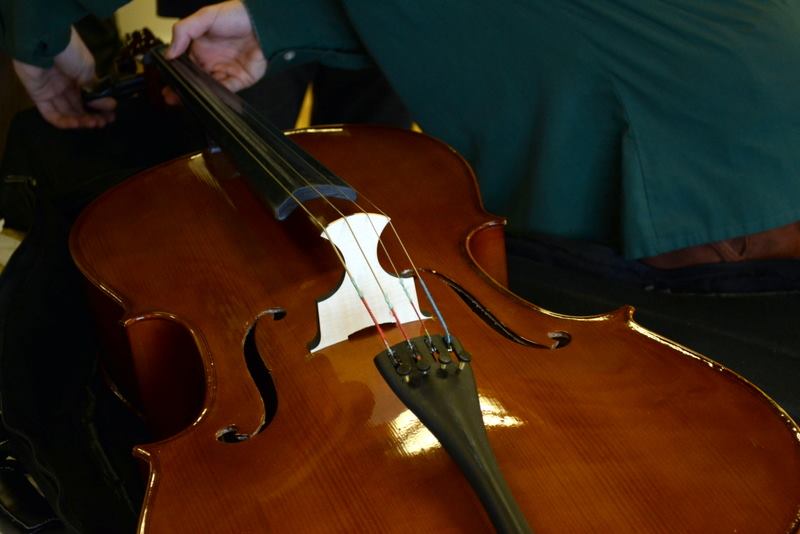 Report regarding the use of rooms in terms of coloring sound in itself.

Report regarding the tryouts with designing clarinet barrels.

Report by Stefán Ólafur Ólafsson and Þorkell Nordal - [only in Icelandic]

Report on the experimental cello bridge designs made in the course.

Composer Þorkell Nordal wrote a short work for clarinet that were recorded by using 4 kinds of different barrels, first using the barrel #6-1, which is in the shape of a standard barrel, but only longer. #3-2-1 which affects the timbre of the instrument, #2 which overwrites the function of the fingerings and a standard barrel. It's possible to listen below.

Study for clarinet by Þorkell Nordal

Study for Clarinet by Þorkell Nordal - using a standard barrel

Composer Örn Ýmir Arason wrote a short work for cello that were recorded in 2 versions, the experimental bridge R1 and the other version by using experimental bridge marked 0. The tuning of the instrument is not the same between recording. It's possible to listen below. 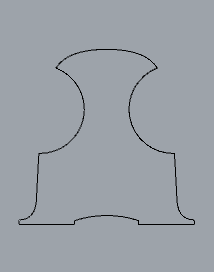 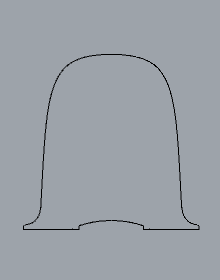